Our Favourite Goals of the 1980s

Two mazy dribbles and a sweetly-struck volley from an improbable angle – these are our favourite goals from the 80s.

By the time the 80s came around troubled genius George Best was in the twilight of his career, playing for the San Jose Earthquakes in the NASL.

While he may not have had the speed and strength of his younger self, he still had magic in his feet, as he so expertly demonstrated against the Fort Lauderdale Strikers in July of 1981.

The Earthquakes were trailing the Strikers by two goals at the Spartan Stadium when Best exchanged passes with a teammate and made his way towards goal. The Manchester United legend let the return pass run across his body and for a moment it looked like a poor decision as two opponents homed in on the loose ball.

But before they could win possession, Best used the outside of his boot to shift the ball to the right with his assailants overcommitted. One stalled like a learner driver at traffic lights, the other was reduced to a flailing heap on the floor.

Once he reached the edge of the 18-yard-box his path to goal was blocked by a trio of defenders. The former Northern Ireland international feinted to shoot with his right before cutting onto his left, but two sentries were now practically on top of him.

Best dropped his right shoulder and feinted to shoot with his left foot, but the defenders didn’t fall for it and they lunged in to win the ball. Somehow the 1968 European Cup winner managed to move the ball out of their reach with an improbable flash of his right boot.

There was still one more opponent to beat and Best chopped the ball back inside to open up a clear sight of goal and before a last-ditch challenge could finally stop his slaloming run he thrashed a shot past the goalkeeper and into the back of the net.

Even at the age of 34, he still had the balance and technical wizardry to waltz through the opposition, prompting the American commentator to exclaim “that’s the greatest soccer goal I’ve ever seen.”

Blistering heat is beating down on the Estadio Azteca during the World Cup quarter-final between England and Argentina in 1986.

The game is approaching the 55th minute and England are trailing to one of the most notorious goals in goals in football history. Four minutes earlier, Diego Maradona, La Albiceleste’s captain, talisman and diminutive genius had given the South American’s the lead by beating England’s goalkeeper Peter Shilton to the ball with his hand and guiding it into the net. Incredibly, the goal dubbed The Hand of God was to be overshadowed by a moment of absurd brilliance from Argentina’s chief mischief-maker.

After deceiving the referee with a dirty trick the 5ft 5in sinner then decided it was time show the Three Lions why his talent matched his craftiness.

Receiving the ball facing his own goal, inside the Argentine half, to the right of the centre circle, Maradona spins away from Peter Beardsley and Peter Reid who look like early adopters to walking football as the blue-shirted no.10 accelerates down the right channel.

Terry Butcher comes across to meet the threat, but over commits and clears a path for Maradona to skip inside and close in on the penalty area.

Poor old Terry Fenwick is left woefully exposed in a one v one with the Napoli legend who skips past him like a stone skimming water.

Shilton races off his line, fearing this fireball is about to burn through his house, but he can do another to stop Maradona rounding him and slipping the ball into the empty net despite the last-ditch challenge of Butcher, who had managed to scurry back.

“You have to say that’s magnificent! Pure football genius,” shrieked BBC commentator, Barry Davies. Only a goal of this magnitude could eclipse his previous misdemeanour and compel his detractors to applaud his genius. 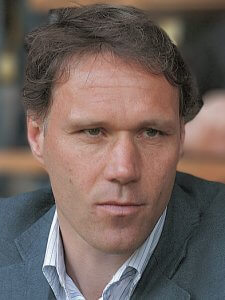 Marco van Basten scored goals, lots of them. Headers, tap-ins, chips, piledrivers – he netted the lot and from anywhere on the pitch. But no one expected him to score from such an improbable angle in the 1988 European Championship final.

Holland were leading the game 1-0 thanks to a bulldozing header from Ruud Gullit in the first half. As the game entered the 54th minute Arnold Muhren lofts a ball to the back post from the left wing.

Sensing no immediate danger the Soviet defenders shuffle into position, making sure Gullit is marked in front of goal.

Van Basten’s marker follows him out to the right-hand side of the 18-yard-box, fully expecting the striker to control the overhit cross and pick out a teammate in a better position. Instead, the no.12 let’s rip from a ludicrous angle.

Nine times out of 10 this hit-and-hope volley ends up in the stands, much to the dismay of teammates and fans.

But with the grace and athleticism of a gymnast, Van Basten springs into action, suspending himself several feet off the ground to connect with a sweetly-struck volley that hurtles through the Munich air like a meteor speeding towards earth.

Unfortunately for Rinat Dasayev this was heading for the back of the net. The Soviet goalkeeper barely has time to react, flinging a token an arm up in the air, before stumbling around like a dazed boxer trying to regain his balance after a haymaker.

Dutch coach, Rinus Michels, is equally shaken – unable to control his astonishment as he covers his face with his hands.